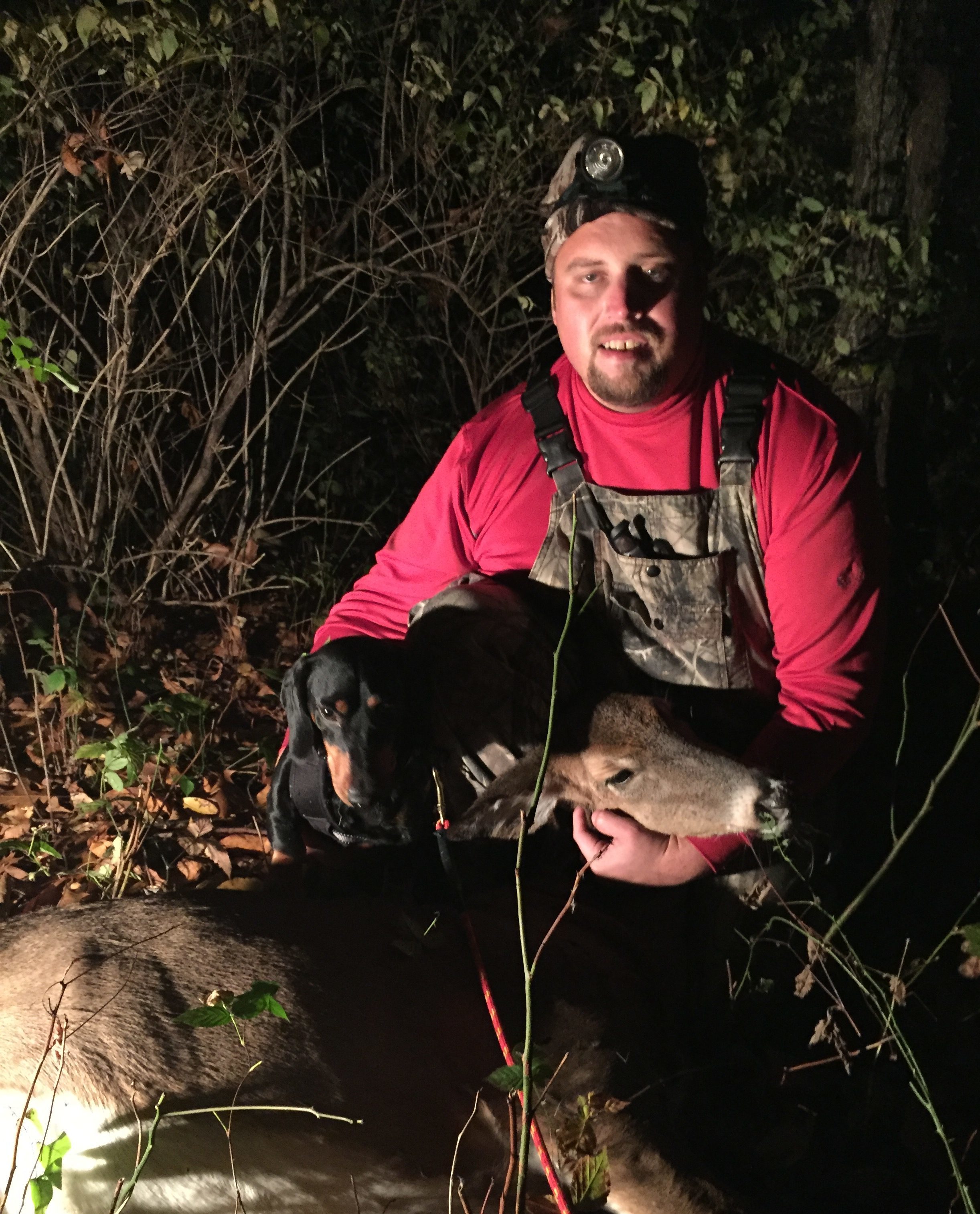 Many people understand that the dachshund breed are great hunters with the breed originally used to hunt the bad-to-the-bone badger!!! They are of the hound family, and smooth coat dachshunds make great tracking dogs in the northern states! So our mission here at BDH is to breed and train smooth coat dachshunds for game recovery, field trials and to ensure excellent temperaments, making them great pets and family dogs.

At Brown’s Dachshund Hunt (BDH), we breed and train standard smooth coat dachshunds to track wounded deer. Our dogs are of the very highest quality you can obtain anywhere. At BDH we have a state of the art training facility, kennel, and great hunting property!  Phase one of our home/facility was completed as of November 5th 2019. We have other things in the planning stage to expand BDH in the near future so, stay tuned!!

How it all began

My dream of Brown’s Dachshund Hunt began 6 years ago on a cold November morning during deer season. While bow hunting that morning, a nice mature doe came right under my stand, and I took a questionable shot straight below me. The arrow hit right where I wanted, but it was a single lung strike. After waiting several hours before looking for the deer, the search began. It was not long before we realized we had some work ahead of us to recover her. We backed out of the woods, and I remembered I had a friend that had a blood hound that was used for tracking deer. I called him, and he and Mia, the bloodhound, were on the scene shortly. What followed was extraordinary. It took about an hour for the doe to be recovered. At that moment, a strong desire started in me to have my own tracking dog. This was a day I will forever remember.

I knew I wanted to have a game recovery dog, but I desired something smaller than a bloodhound.I remembered seeing a picture in a bow hunting magazine of a dachshund sitting on a buck that had been recovered.. I was sold on a dachshunds from that point on. After calling my very good friend Ray Weaver, who owns Bittersweet Kennels and is the most respected trainer for hundreds of miles in northern Indiana, I told him what I wanted to do, and he agreed to help me with my quest. Two weeks later, Fletch arrived from Goodwood Dachshunds in Oregon. He was 10 weeks old, and the journey began! Ray helped by starting Fletch's training, and has instructed me on how to work with Fletch over the last 8 years. We added Holli in 2016. She was purchased from the Ukraine and is a great dog herself. She now has two litters under her belt.  I moved into this beautiful place in June of 2019  with lots of work needing done to make our place safe and comfortable for us and our dogs. So phase one, a basic completion of our kennel and home took place in early November 2019. 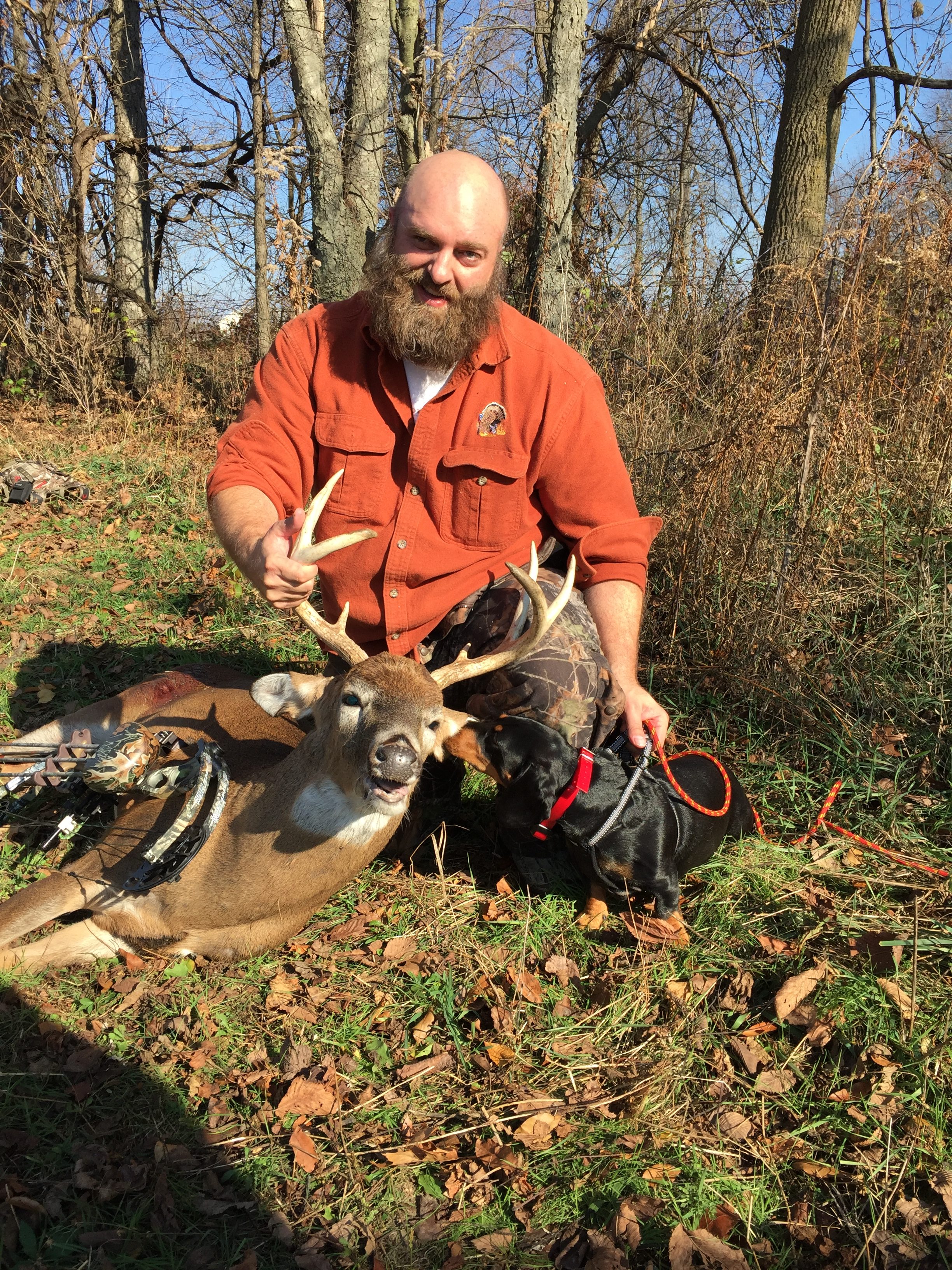 In Memory of our good friend Joshua Weaver

In memory of Joshua Weaver, who passed away in the summer of 2018. (Picture to the Left) was Joshua's biggest buck of his life while bow hunting and Fletch's best recovery to date. This deer traveled just under a mile before being recovered!!